How Japanese People Take Their Tea 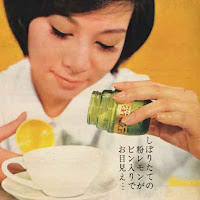 Black tea is a popular "Western" drink in Japan, and it is widely available at restaurants, cafes, and in bottled form at supermarkets and in vending machines. Specialty shops offer a wide variety of black teas to the enthusiast, but in casual restaurants and cafes, the popularly available black tea is Earl Grey.

Black tea is usually served in one of four forms in Japan:


Straight Tea (ストレートティー):
Black tea without any condiments. In restaurants and cafes, this means that the leaves or tea bags are steeped in boiling water, then the tea is served (hot or iced) without sugar or anything else. However, bottled teas labeled as "Straight Tea," like that of Kirin's line 午後の紅茶, often contain sugar or other sweeteners.

Lemon Tea (レモンティー):
Tea with lemon and sweetener to taste. The lemon flavor may come from actual slices of fruit or from a concentrated liquid available in a single-serving size plastic cup, like coffee creamer in the the West. The story of lemon tea in Japan is actually quite fascinating:

In the 1960s, the American citrus coop Sunkist was looking to expand its sales in the Japanese market. Specifically, they were looking for a way to sell more lemons (as in, the fruit, not bad products) and lemon products to Japanese people, who weren't buying the things because they didn't know what to do with them. Knowing that tea is a big part of Japanese culture, they wrote up ads for publication in a weekly ladies' magazine. They showed scenes of women enjoying tea with lemon slices or gently tapping dried lemon powder into cups of black tea. It was implied that drinking tea with lemon was a common American pastime, and the practice took off in Japan as the new, trendy, "Californian" way to drink tea. Even today, lemon in tea is perceived and perpetuated as a popular foreign-style condiment.

Unfortunately, some of the details on this story are suspiciously lacking, and it may be more proper to call it the "exaggerated urban legend" of lemon tea in Japan. However, that doesn't change the fact that lemon in tea is massively popular here, to the point that a waiter's common response to a request for tea is "Lemon or milk?"*

Milk Tea (ミルクティー):
Tea with milk and sweetener to taste. It doesn't have the oddball probable history of its lemony counterpart, but at least the distinction in Japanese of "milk for tea" and "normal milk" is interesting from an English-speaker's perspective. When preparing tea at home, of course it's not unusual to use milk from a carton purchased at the supermarket. But while normal milk from the supermarket goes by the name 牛乳, milk meant for use in tea, in a tiny little pitcher brought to you with the teapot or in a little plastic coffee-creamer container, is called ミルク. Using the word 牛乳 in this capacity will have you gently corrected: "No, this is ミルク."

Royal Milk Tea (ロイヤルミルクティー):
Another commercial success story, royal milk tea was first listed on the menu of Tea House Lipton in the 1950s, and its popularity spread with the success of the Lipton brand in Japan. It differs from normal milk
tea in that the tea leaves are boiled in a pot directly with the milk (starting first with a small amount of water to ensure the flavor of the tea leaves fully comes out). The tea-flavored milk is then strained into a cup and sweetening agents are added.

*Of note, the Japanese Wikipedia article for "lemon tea" mentions that although lemon tea is not commonly encountered in the US or much of Western Europe, the drink is enjoyed in Germanic countries including The Netherlands, Denmark, and Germany. And in Poland, tea is apparently served with lemon by default.