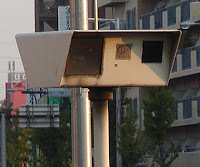 Despite being the home of Toyota and Honda, Japan is not a land known for its generous speed limits. As a matter of fact, I am hard-pressed to think of any posted speed limit in excess of 80km/h, and that is on the expressway! So what keeps lead-footed drivers in check in Japan? Is it Japan's legendary adherence to societal rules? Or perhaps it's the iron fist of The Law?

The answer, as it turns out, is much more of the latter. Take a quick trip down any highway and you are bound to come across a set of jido sokudo ihan torishimari sochi (自動速度違反取締装置, literally "automated speed violation control devices"), better know as "speed violations cameras."
Where to Find Speed Cameras?
The most common place to run across a speed camera are on expressways (kosoku doro 高速道路). Expressway cameras are commonly known as oobisu (オービス), which is Latin for "eye" and the brand name of the first speed cameras made my defense giant Boeing, Co.

The number and placement of cameras depends on the policies of the prefectural police and the highway operator. I have personally driven on roads that have long stretches of no cameras as well roads that seem to have a camera set up every few kilometers. Anecdotally, I have heard that Osaka and Tokyo are the most proactive prefectures when it comes to setting up automated speed traps.

However, speed sensing equipment isn't limited to the big highways and byways. Many national roads (kokudo 国道, or roads that cross through one or more prefectures) also have speed-sensing devices. Even some local roads in areas like Tokyo are seeing an increase in speed sensors in the name of public safety.
Luckily, speed cameras are not hard to find as the authorities are legally obligated to give you sufficient warning along stretches of road that are under surveillance. Usually these notifications take the form of blue on white signs (see left),  although the color schemes, sizes and wording changes from prefecture to prefecture.

In my own experience, there will usually be one or two signs before the actual speed trap hits, so it pays to keep you eyes open. Look for signs containing the characters 速度 and 取締 and there is a safe bet that you will be hitting a speed camera soon. And remember, these signs aren't always prominent. Usually they're relatively small and located around the left-most lane.

Some navigation devices also sell optional software add-ons that give the location of known cameras. Radar detectors are sometimes effective counter measures as well, but it largely depends on the make of the speed sensor in question.

That being said, this is only an estimate and some cameras are likely more sensative than others. So if you are in an area that has a speed camera, don't get cocky and try to push the speed envelope. If you get caught by a speed camera on a regular road there is a good chance you will get a license suspension.

Types of Speed Detection Devices
There are several types of systems in place to catch speed scaflaws. Here are a few... 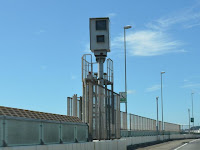 Radar Type (reedaa-shiki レーダー式)
These systems are the most conventional. They consist of two parts, a radar dish and high speed camera to snap license plate photos. They are usually found on highways, suspended on metal arches overhead.

In some set ups, the radar dishes are seperated from the actual cameras, which are located further down the way. Many older models still use physical film so it is possible for the camera to run out of shots. Older types also use bright halogen flashes when triggered. The flash will still go off even if the camera is out of film.

Loop Coil Types (ruupu koiru-shikiループコイル式)
These systems are a bit trickier to stop as they don't actually use radar dishes to measure speed. Rather, electro-magnetic "loop coils" are build into the pavement to measure speed. The can be used with a standard radar type camera or with the H-System setup (see below).

These cameras are the hardest to avoid since the only clue to their presence are tiny maintenance hatches on the road and the obligatorily speed observation warning signs. Drive with caution around these babies.

H-System (h-shisutemu Hシステム)The H System takes its name from the Hanshin Expressway where it was first deployed. This represents the second generation of speed detection technology.

The H System combines advanced radar with fully-digital, infrared cameras. Unlike older radar camera setups, these bad boys send data right to the local police. They also don't require high intensity flashes or physical film slides. Some newer models use specialized radar frequencies, meaning that you have to have a specially tuned radar detector in order to spot them. 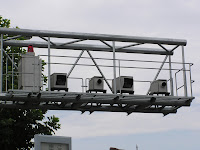 LH-System (l h-shisutemu LHシステム)
This is a fusion of the Loop Coil and the H System into one speed violator catching monstrosity. These systems forgo radar for the aforementioned loop coils while use the digital photograph system found the the regular H-System

These are some of the trickiest to avoid, and if you get caught there is little chance that you will get off the hook.

Photo Electric Type (kodenka-shiki 光電管式)
Small, inconspicuous, and easily setup, these photo electric speed sensors are a favorite of police setting up mobile speed traps. These sensors and reflectors are usually set up on either side of one lane and are rarely used as fixed speed violations systems like the above mentioned systems.

If you do get caught by one of these guys, chances are an officer will pop out down the road and pull you over by waving a red flag. Odds have it that the police already have mobile check point set up, sometimes even with fold-out tables and ballpoint pens, where they can efficiently issue and process your ticket on the spot.

Whether or not these cameras are digital or film type is unclear, but you will usually see a bright flash if you are caught speeding.

If You Get Caught
Unless you hit a photo electric sensor with a manned police detail, a ticket from a speed trap will probably be dispensed by the local prefectural police and arrive at your car's registered address by mail. In some cases, it can take months for a ticket to come (especially if it was taken by an old style radar camera), while others arrive in a few days. I have heard a few accounts from friends who have seen the flash of a speed camera only to have no violation notice sent. However, this is much more the exception than the rule, so don't get too excited.

Violation notifications (technically called tsuchi-sho 通知書) require you to show up in person at the issuing police station. If you were caught in a different prefecture, you will have to call up the ticket issuing police agency and ask them to send the ticket to your local police authority. When stopping by the local cop shop, make sure to bring your license, vehicle inspection certificate (jidoshaken-sho 自動車検書), and personal seal.


Have you gotten busted by a speed camera or had any other speed related shenanigans in Japan? If so, let us know in the comments.