This post continues my chronicle of moving to a new apartment in Japan. Today I have a big list of things to get done. One of them is finding a new light fixture for my new bedroom.

Week 4, Wednesday:
Most apartments I have viewed in Japan don't include their own light fixtures. A couple fixtures, like an entryway light, hallway light, or bathroom light, might be considered part of the property, but the main light fixtures in the kitchen and bedrooms are often considered furnishings. In other words, when I move into a new place, it's usually my responsibility as a tenant to obtain and install ceiling lights.

Fortunately, connections for light fixtures in Japan are standardized and user-friendly. Chances are that any given apartment's sockets will fall into one of these categories: 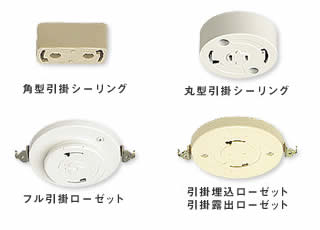 They all work the same way: The light fixture itself will have a couple of steel fittings that slide into the wide opening on the crescent-shaped holes. The whole fixture is then rotated clockwise to secure it in place. This connects it to the power supply and also helps keep your lights attached to the ceiling during earthquakes.

Some light fixtures may not be compatible with some socket types. A fixture's instruction manual and packaging often has clear markings displaying which socket types it supports. For what it's worth, though, I've taken my light fixtures with me through several moves and have yet to run into an incompatible socket.

The most difficulty I had in installing any light was not being able to reach the ceiling and, because I'd just moved in, not having a chair handy to help. I stood once precariously on a cardboard moving box to get my light installed, and this time I actually borrowed a folding chair from my workplace to get the job done. 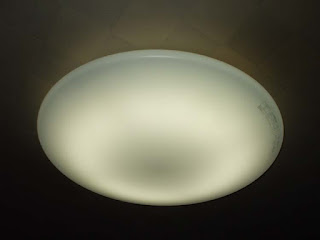 This is the type of light generally associated with the term "ceiling light" (シーリングライト). It costs about 10,000 yen to buy a new, entry-level model, and current designs often include both a pullstring and a remote control so you can turn the light off at bedtime without walking over to the switch. How wonderful.

In the last couple years, LEDs have been taking over the ceiling light market. They consume less energy and, in my experience, aren't as harsh as the older florescent counterparts. Higher-end LED models can bathe the room in a few different colors of light: cold white, warm yellow, subdued green, useless pink, etc.

Expect to pay more for these. Current-gen, high-end LED models seem to run in the 30,000-50,000 yen range. But when the next generation of products is released, the old ones quickly drop in price. Not long after Sharp announced its "sakura pink" line of ceiling lights last August, I scooped up the previous year's two-color LED model for just 13,000 yen. It pays to shop around.

If you want to spend as little as possible on your ceiling lights, check out a local recycle shop. They probably have a display of used light fixtures--and as you're wandering around the shop trying to find said display, remember to look up, because the dozen or so lights they have for sale might be actually hanging from the ceiling. The dangling tags on these lights will reveal prices much lower than your local electronics store, and if you don't care about having a one-button remote control for your ceiling light, you can snap up a solid florescent tube fixture (which either didn't have a remote or whose remote was lost by the previous owner) for a couple thousand yen.

The pickings at a recycle shop will be especially good during moving seasons (March-April, when new jobs begin, and September-October, when employees get transferred between regional branches). But, there's also a surge of buyers during these seasons, so the best deals will get snapped up quick.