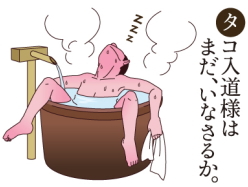 As both former member of my university's onsen club (yes, that is a real club) and a person who generally enjoys being lazy, I feel that I am fairly well qualified to speak on the peculiarities of onsen etiquette.

Generally speaking, the time honored tradition of hot spring bathing involves some very specific rules. However, in my own experience there are a few "unwritten rules" as well. Let's take a look...

The Code of the Onsen
These rules apply to onsen of all shapes and sizes.

Here are some "suggestions" that might help improve your onsen etiquette
Know any other onsen rules or have some experiences to share? If so, let us know in the comment section.