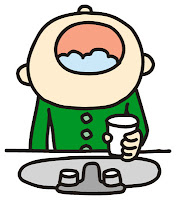 When I was a little kid, my parents and teachers drilled into me the importance of hand-washing for staving off colds and other illness. At the time I was terrified to think that there were things crawling around on my skin that I couldn't see, and I became paranoid about shaking other peoples' hands or sharing a glass or utensil with anyone else. I eventually got over it, but it took the better part of two decades.

In Japan as well, hand-washing is considered an important sanitary measure and children are taught to do it from an early age. Elementary school teachers and junior high school teachers (yes, really) demonstrate proper hand-washing behavior to students and then watch as students practice. Presumably offering tips. "Make sure to scrub all the way up to your wrist, Timmy!"

Now, hand-washing in Japan offers plenty of tangents to spiral off on, like the rarity of soap, paper towels, and hot water in public restrooms or the crazy little sink lids outfitted on toilet water tanks (you are supposed to wash your hands with the water that pours into the tank at the end of the flush cycle).

But the one I want to talk about today is the inseparable partner of hand-washing in Japan: The gargle.

Gargling (called うがい, or ugai) is another hygiene ritual to stave off disease and general malaise. It is extensively practiced in Japan. In fact, those elementary school hygiene lessons I talked about usually include gargling as a final step of the hand-washing routine: Once your hands are clean, cup one to collect water, bring it to your mouth, and gargle for a few seconds before spitting into the sink drain.

Hardcore Japanese garglers, or those feeling a cold coming on, will often mix iodine in a cup and use that to gargle instead of plain water. I've tried this a few times and can assure you that it's a great way to fill your mouth with an iodine aftertaste for the next hour.

With my non-gargling background, I was a little apprehensive about all the noise and spitting I encountered during my first few years in Japan. And I was highly skeptical. What is gargling actually going to do for anyone besides swishing around some microorganisms already in your mouth and probably introducing new ones?

Yet Japanese doctors persisted any time I showed up complaining of a sore throat. "Are you gargling every morning when you wake up?" they asked. Not knowing any better on my first visit to a Japanese doctor, I innocently replied in the negative. This was met with an incredulous expression and then a patronizing, "Oh, right, you're not Japanese... Do you know how to gargle?"

Eventually my contentious relationship with gargling came to a head when a girlfriend insisted that my not gargling was negatively impacting the hygiene of our general household. By refusing to gargle, I was allowing my throat to become a breeding ground for filth and disease which would spread around the room every time I talked or yawned or ate or breathed.

Despite Japan's love-affair with gargling and the consequent potential for bias, these studies seem to have a solid, logical setup: In all the papers I read, individuals had been randomly assigned to either a non-gargling control group or a gargling test group. The experiment ran for a few months like this, and at the end researchers tried to find out which group had caught the most colds during the experiment. Some studies included iodine mixes among their test groups; other studies tried to calculate the cost-effectiveness of gargling as preventative care.

But aside from each study's tweaks to the formula, the main result seemed pretty consistent: Gargling (with water*) appears to have a statistically significant correlation with better respiratory tract health. Whether this is actually causative is still open to debate. Maybe gargling just encourages you to also take sips of water more often throughout the day, keeping you well-hydrated. But regardless, gargling is by some means associated with better health.

(*Gargling with iodine, on the other hand, kills your mouth's native flora and is apparently as harmful as it is helpful. The iodine test groups tended to catch at least as many colds as the control group.)

So next time you walk into a public restroom only to find a line of people head-upturned in burbling chorus, cut them a little slack. Gargling lacks refinement, sure, but it's neither unhygienic nor meaningless, and it's part of what makes this country an endless source of quirks to write about.