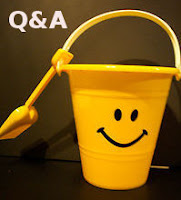 I asked for a "shovel" at my local home & garden store and was presented with a gardening trowel. But シャベル shows up in Japanese dictionaries as "shovel," and Google image results for シャベル are overwhelmingly of large, long-handled shovels. What gives?

シャベル comes from the English "shovel", and スコップ comes from the Dutch "schop." The names are different, but in principle they refer to the same thing.
Sometimes the names are used to differentiate between sizes of shovels. However, usage varies widely: one person may use スコップ to indicate a smaller size where another person uses シャベル  to talk about the same tool and expects to hear スコップ when talking about a larger one. You may notice trends in usage according to your region, but they probably completely contradict the trends found in at least one other part of Japan.
Tool manufacturers may also use the two names separately to refer to different blade shapes. For example, a tool whose blade provides a place for you to put your weight on it (a straight shoulder you can set your foot against to help drive the blade into the ground) might be called a シャベル whereas a tool without such a shoulder would be called a スコップ. This naming difference might apply even if the two tools were otherwise of similar size and construction.

Sounds like if one doesn't work, try using the other until you figure out which word refers to which tool in your locale. Interestingly, a similar linguistic feud exists between the English words shovel and spade:

Depending on who you ask, a shovel may have a flat blade or a blade that comes to a point. The Wikipedia page for shovel, in contrast to the page for spade, suggests that in natural usage, shovel is a broad term that encompasses subcategories such as pointed digging spades. I guess that fits my personal experience with the words, but just a minimal amount of research seemed to indicate that in some places, digging tools are adamantly referred to as spades: Again, the matter seems to boil down to regional custom and preference. In fact, the only common thread I found through all of these links is a general consensus that spades are meant for digging and shovels meant for shoveling--that is, moving some already loose substance from one place to another--but that the tools are in many cases similar enough to accommodate either purpose.

呼び名 - yobina - name
両者 - ryousha - both things, the two of them
同程度 - douteido - similar extent
(→ 同程度の大きさでも, "even if they are about the same size")
なで型 - nadegata - rounded shoulders (referring to a blade without a lip to set your foot against)*
*(This word contains an unusual kanji choice, and I'm not sure if it was the author's intent to emphasize design and avoid personification, or if it was just a simple mistake. The normal kanji is なで肩, indicating a person with rounded or gently sloping shoulders, ones which a shoulderbag would easily slide off of.)