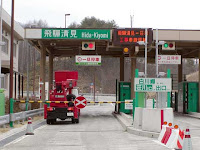 The Japanese highway system is fast, modern, and very well maintained. But if there is one thing it is not it is cheap.

As long term readers may remember, AccessJ has long extolled the virtues of getting your very own ETC (Electronic Toll Collection) card reader and card if only to take part in the hefty toll discounts that they offer. However, thanks to a change in the government's transportation policy, unhappy drivers can look forward to the possibility of even higher toll and less discounts in the future.

So what is with all the talk about charging even more for access to what is surely already one of the world's most expensive transit networks? Well as you may know, many Japanese highways are actually operated by regional private companies primarily under the NEXCO brand. Therefore, despite having roads built with public funds, the actual transit network is operating under a for-profit model.

In addition, the building of highways prior to privatization has been almost entirely funded by issuing debt. Theoretically, tolls were set up as a means of re-paying this enormous debt until the day that the highways become relatively self sustaining. However, since even rosy projections don't expect the highway debt to disappear until around 2050, it doesn't look like toll booths will be going anywhere, especially with the advent of privatization.


Up until now, the government has provided matching or nearly matching funds to highway operators for new roads, upkeep, and to ensure profitability. However, come 2014, the Ministry of Land, Infrastructure, Transport, and Tourism has announced plans to sharply reduce the use of national funds (kokuhi 国費) to subsidize road companies. The goal is to make highway companies use their accumulated funds and(jishu zaigen 自主財源) profits without excessive reliance on the taxpayer.

Of course, there are many things that highway companies could do to earn money other than raise the price of traveling such as cutting out inefficiencies, building fewer roads that are lightly used, and so on. But the chances of this happening seem to be rather slim. To make matters worse, even if tolls are not raised by a single yen, the consumption tax increase due for 2014 will mean higher prices no matter what.