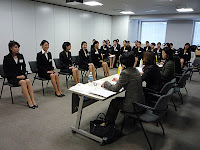 Among the frantic fanaticism of Dogs and Demons, Alex Kerr lays down a valid point: The pinnacle of the Japanese education system are students who are extremely good at memorizing and reciting data. So has the world of Japanese interviews long rewarded interviewees: Those who could flawlessly recite a 60-second 自己紹介 and 志望動機, answer predictable questions with predictable answers, and complete the motions of the process, got the job.

Last week, I gave my two cents on the changing environment of job interviews in Japan. I wrap up that line of thought here.

Kerr serves up his point in a discussion on education. In Japan, gates exist between junior high schools and high schools, high schools and universities, concentrating the students who are best at passing those gates in a select few locations. They are respected around the nation for their intelligence (you don't drop a remark like "I attended 東大" without eliciting a little awe), because they are intelligent--in a given way, and passing through those gates proves it. They can catalog and access facts in their mind and at a rate that mystifies others.

For these students, the logical step after attending one of the best high schools and best universities in the nation was to work at one of the best companies in the nation. Companies able to attract such graduates welcomed them with open arms (they are, after all, the nation's elite) after testing them one more time, in a manner very similar to the way high schools and universities tested their entrants, to verify their ability to memorize facts. That is to say, the types of tests used for screening recruits, such as the SPI2, CAB, or GAB, screen for vocabulary, ability to quickly solve problems of mathematical probability, and ability to analyze complex data presented in a chart, a bit like the GRE or GMAT.

This formed a disproportion among the graduates filling up elite positions at top companies in Japan. They were proven test-takers. They were able to absorb and apply data, and they were certainly able to learn and perform any task for which they could be trained. But other qualities more difficult to test on paper for, such as creativity, optimism, patience, daring, and self-confidence, had perhaps been missed by an interviewing process largely glossed over in favor of test results. And these disproportionately prevalent qualities had ensured continuation of the company only so long as the company never had need to deviate from status quo.

In the last few years, however, a growing number of Japanese companies have decided that they'd like to do new and different things--as a company. Often this is due to a new focus on globalization by developing brands and products that can compete abroad; but regardless of the reasons, the conclusion often drawn, after failing to get difference from the undulating sameness they've supported to that point, is: If we want to do something different, we need employees who think differently.

Thus the changes in the interviewing process. Thus the new critical eye cast over your 志望動機. Thus the prying to find out if your displayed passion about the company is sincere and expansive, what creative projects you have engaged yourself in as a student, when and how often you've taken a leap of faith before in life, and whether your attested motivation and drive in life precedes this season's 就活, or whether your correct answers to the interview questions are merely committed to memory according to the current edition of Secrets of a Successful Resume.


What do you think? What are your experiences interviewing for jobs in Japan? How do you think the shushoku environment is changing? Let us know in the comments below.