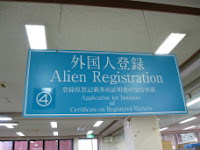 As we have covered earlier, the alien registration system and basic resident registration system in Japan are undergoing big changes this year. This week, we will look at the replacement for the venerable Certificate of Alien Registration (gaikokjin toroku shomeisho﻿ 外国人登録証明書), the zairyu card (在留カード), AKA the "Residence Card."


Why Was the System Changed?
Long story short, the Alien Registration system was a relic of ages past. The system involved multiple disparate databases and, as we have covered last week, foreigners were not permitted to enter the same resident registry as Japanese nationals.

But perhaps one of the biggest impetus for change was that the Alien Registration system was administered by the local village, town, or ward as opposed a national agency. This meant that when ever you move to a new municipality, your old municipality must literally post all your documents to your new local government. ﻿

The new system will combine all the local Alien Registration systems under the auspices of the Ministry of Justice (homusho 法務省) and the Immigration Bureau (nyukoku kanri-kyoku 入国管理局), relieving localities the burden of handling a separate system.

The new Resident Car﻿d will look not too dissimilar from the old Alien Registration certificate. Relevant details including date of birth, nationality, address, period of stay and so on are all the same. However, there is the addition of the new category of shuroseigen no umu (就労制限の有無), or "permission to work" and zairyu kikan koshin kyoka (在留期間更新許可), or "permission to extend your period of residence."

The "permission to work" is normally covered by your status of residence (i.e. instructor, engineer, etc.) but in the case of students, it will still be necessary to apply for a permission to work after receiving your Residence Card.

Another interesting addition is the inclusion of an IC chip imbedded in the card, much like newer Japanese drivers licenses. While this is officially to prevent easy duplication and allow the authorities to spot fakes, some commentators see this as a covert means of tracking your every move.

As far as making changes to the card go, changing addresses is as simple as going to your local village, town, city, or ward office. All other changes, including name changes, visa status changes, marriages, births, and deaths must be reported to an regional Immigration Bureau and a new card will be issued.

Good and Bad Points of the New System