The JLPT: Japanese TV as kanji and listening practice 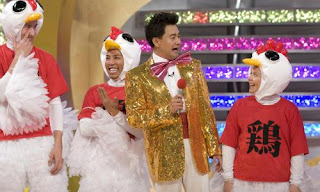 Even if you have never set foot in Japan, there is a good chance you have heard of the unbridled wackiness that is Japanese television. Believe it or not, the inanity that is makes up the bulk of silly game shows and variety shows can be a treasure trove of kanji and listening knowledge for all those who are trying to master the Japanese Language Proficency Test.

Personally, I have never been a big proponent of the "brute force" kanji learning method that is all the rage with flashcard aficionados. Rather, I learn by reading, making note of new kanji, reviewing and then looking for them in my everyday life. I have found that the much maligned (and not without a good reason) Japanese TV world is a perfect way of putting kanji and listening together.

If listening to Japanese radio isn't your thing, then evening TV might be the way to go for one of several reasons:
Far and away the most compelling reason to watch Japanese TV is to take advantage of the obscene amount of subtitles found in just about every show. The excessive use of subtitles makes it easy to match speech to to kanji and, in my own experience, it has been a great way to form a solid mental link between vocabulary, spoken Japanese, and kaji.


Do you have any tried and true Japanese study tips? If so, let us know in the comment section!