Tax Increases in Japan for 2013 and beyond 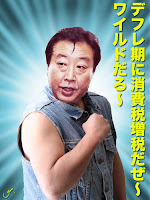 Feel that your pay packet is a little lighter these days? Perhaps it is a raise in your insurance, or maybe you bonus is a little smaller. While those maybe  a problem, pesky tax increases (zozei 増税) are also taking effect, so watch your wallet carefully.

After the Great Tohoku Earthquake, the already debt laden Japanese government needed to find a way to cover the monumental costs incurred by this unprecedented natural disaster. In order to help put the Tohoku region back together, a special "reconstruction tax" (fukko tokubetsu-zei 復興特別税) has been added and a planned five percent decrease to the corporate tax rate was scraped.


Note that is only income related and it is not related to the impending consumption tax (shohi-zei 消費税) increase scheduled to begin taking effect in 2014. The tax rates are in effect for 35 years before they must be renewed by the National Diet.

For regular income tax (shotoku-zei 所得税), this tax amount to an approximately 2.1 percent increase for most tax brackets.

For resident tax (jumin-zei 住民税 also know as "local tax" or "prefecture and municipal tax"), the rate will jump about 1,000 yen per month. This is made up of a 500 yen increase in town/city/ward taxes and separate 500 yen increase in prefectural tax rates.

For income related to securities and dividends ( jojo kabushiki nado no haito nado ni kakawaru shotoku-zei 上場株式等の配当等に係る所得税), the formula is a bit trickier since it involves both resident tax, income tax (treated as special income separate from salaried income), and special reconstruction tax. The break down looks something like this:

Know of any other tax increases on the horizon? If so, let us know in the comment section.

Email ThisBlogThis!Share to TwitterShare to FacebookShare to Pinterest
Labels: Taxes