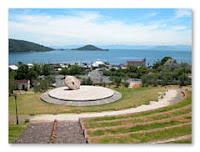 Shoudoshima 小豆島 is a small island South-East of Okayama, just East of Shikoku. Despite being largely empty and dotted with several burnt out or abandoned hotels and buildings, it has some great sights off the beaten track. It's a famous location for soy sauce production. In fact, the whole island literally stinks of it 24/7.

It's very cycle friendly (the island bus is pretty infrequent anyway), and it's definitely worth renting bikes to see the sights. The Hostelling International place rents out granny-bikes for 300 yen a day. Cars can be rented from several places, but book ahead in high season.

Pick up a map at the port you come in to (usually Tonoshou), but don't expect much English help there.

Sights
There are several other things to do, including scaling a local mountain by ropeway and seeing a bunch of temples, so check out the Shodoshim town website (English) for more.