Renewing Shaken After it Expires 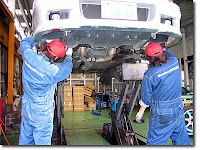 Shaken (車検), the mandatory vehicle safety and emissions test in Japan, was recently addressed in a series of posts on AccessJ comprising Dom's excellent self-shaken guide. To keep your car on the road in Japan (as a non-commercial driver, that is), you'll have to have a shaken inspection done on it every 2 years, your own car's expiration date indicated by a square sticker top-and-center on the front windshield.

When a car's shaken expires, it is not legal to drive on public roads in Japan. (So... pretty much everywhere.)


...But slip-ups happen, right? What if you forgot about your shaken until it was too late? Or what about cars in used-car lots? Surely the dealers aren't keeping all their cars up to date until they're sold?* A car is illegal to drive without shaken, but it's not illegal to own such a car, so there must be some way to get the shaken renewed, right??

Well, fear not! There is a way to restore road-worthiness to that 1992 Suzuki Alto whose shaken you forgot about while you were vacationing the summer away in Thailand. And we'll tell you how:

Temporary License Plate (仮ナンバー, kari number)
Unless you're about to call in a tow-truck just to take your car to the local Autobacs, District Land Transport Bureau, or wherever you plan to have the shaken inspection performed, you'll need to drive your vehicle to that location. But remember, the first and biggest problem with a car whose shaken has expired is that it can't be legally driven anywhere (except on that private road you may happen to own that connects your house with the nearest mechanic's shop).

To drive an expired vehicle, you need a temporary license plate. You can apply for such a plate at the Community Services Division (市民課) of your local municipal office (your 市役所, 区役所, etc.) When applying, explain that the plate is for a car whose shaken has expired--that's enough of a reason. You'll need to provide:

1) your expired shaken-sho (車検証)
2) proof of compulsory insurance (自賠責保険証明書)--we'll get to that next
3) the seal (印鑑, inkan) you used to register your shaken-sho
4) your driver's license
5) and about 750 yen.


You'll be issued a temporary plate, which has a foreboding red slash through it and is valid from 3 to 5 days.

This may seem like a lot of work, and I guess you could risk it and just drive the expired vehicle if the shop was just a few minutes away from your home, but the mechanic will probably raise his eyebrows... and could even refuse to provide service (especially for chain stores, policy may be in place to turn such customers away because of questions that could later arise in the shaken application process about how the vehicle got to the shop).

Furthermore, on the off-chance that you were pulled over, you'd face a 300,000 yen fine (about $3750 USD at current rates) or 6 months of imprisonment (that is, you are incarcerated if you cannot pay the fine), plus a 6-point reduction on your license, plus perhaps additional penalties because a shaken-less car is also in most cases uninsured... which is just what we'll talk about next:

Compulsory Insurance (自賠責保険, jibaiseki hoken)
The second big problem with expired vehicles is that they are usually not insured--the jibaiseki hoken usually runs out at the same time as the shaken.

If you're caught driving a car without compulsory insurance, you'll face an additional penalty of 500,000 yen (about $6250), 6 months of imprisonment, and another 6-point reduction on your license. (That's 12 points gone from your license in one sweep, enough to get it suspended from 3 months to 2 years depending on your driving history.)

Also, you won't be able to get the temporary license plate without proof of compulsory insurance, called the 自賠責保険証明書 (jibaiseki hoken shoumeisho).

Compulsory insurance can be purchased in increments from just 5 days (about 5000 yen), meant for people obtaining a temporary license plate in order to drive the car to the dump or to sell and transport a car to someone else without first completing shaken, up to 25 months (price dependent on size of car, up to about 25,000 yen), which is what you want if you'll next be renewing the shaken on your car).

The Inspection
Once you've secured your temporary license plate, you're ready to drive to the garage where you'll have your shaken inspection handled--from here, it's the same process as a normal shaken renewal. For details on places, prices, and what'll occur during the actual inspection, check out AccessJ's shaken guide!

*(In fact, if you've been used car shopping in Japan, you've probably noticed that "remaining shaken" is listed right up there with mileage and body color in a used car spec sheet, and plenty of cars are listed as 車検切れ, meaning the shaken's run out and either you or the dealer, paid by you, will have to renew it.)