So, recently I talked a little about the big pharmacy chains in Japan. But if you're like me, even after you find and walk inside a Japanese pharmacy, you have a bit of difficulty identifying and choosing what you want to buy. Part of this is simple brand unfamiliarity, and part of it is the language barrier--and I'm sorry to say that in my experience, it doesn't get much better with time. Even after I learned Japanese to a tolerable degree, I found that it is a skill of conscious effort. It is still very easy for me to just "tune out" Japanese characters when I'm presented with advertisements, billboards, and product packaging. If I want to know what they say, I have to stop and think about it.

So, anyway, let's get to the point: You've got a headache, you're in Japan, and you want something OTC to take care of it. Here are some of your options:

Eve [Type A] (イブA錠)
Generic Name: ibuprofen
Also Contains: apronalide (mild sedative), caffeine
Eve is one of the best-selling, best-known painkiller brands in Japan. (As of 2011, in fact, it edged out its next competitor, Bufferin, for the #1 market share.)

This may be purely my take on the product, but Eve's brand name, tiny tablet size, designer packaging options, soft-toned TV commercials predominantly featuring female celebrity endorsements leads me to believe that this product might have a gender bias in its marketing patterns and sales figures. (Hell, even one of the main tabs on its website links to a page of tips for "How to reduce/relieve menstrual cramps.") But inside the box, Eve is just garden-variety ibuprofen, good for reducing swelling, fever, and sensations of pain. The dosage size is somewhat small by western standards (I think a regular adult dosage is two tablets, but always check the packaging); if I take that dose and give it a little time to kick in, it tends to work for me for minor headaches. A few of my expat friends use slightly adjusted doses for their particular weights and levels of pain (or pain tolerance).

I did not notice myself getting really sleepy after using Eve--I've taken it at work for headaches--but because of the inclusion of a sedative, driving and operating machinery is not advised after taking it. 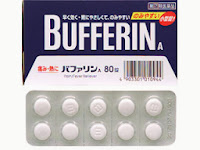 Bufferin [Type A] (バファリンA)
Generic Name: acetylsalicylic acid ( = aspirin)
Also Contains: hydrotalcite (antacid)
Bufferin and Eve are nearly tied for first place in the analgesic market. Produced by healthcare company LION, Bufferin comes in at least half a dozen varieties. But, that doesn't necessarily mean they all contain aspirin:

You probably noticed the weird [Type A] indications after both product names thus far. It's popular for Japanese pharmaceutical companies to keep medications used for the same purpose under the same brand umbrella in order to strengthen the brand's general recognition. Therefore, when the same company puts out two different compounds both meant to treat, say, headaches, they'll use the same brand name for both compounds and instead distinguish the two products with an addendum after the name. So, drugstores end up packed with products like Bufferin A, Bufferin EX, Bufferin Plus S, Bufferin Luna, and Bufferin Luna J.

Think of it kind of like distinguishing between Tylenol, Extra Strength Tylenol, Tylenol Cold, and Tylenol PM. However, whereas the brand name Tylenol is strongly associated with the generic drug acetaminophen, and all Tylenol spinoffs still contain this same active ingredient though they may have added something else to the mix, this is not necessarily the case for products like Bufferin. (And, from my very limited knowledge, I also need to concede that it may not even be the case for most US pharmaceuticals.)

Anyway, the point is: Check the label of any OTC product you consider buying. Just because it carries the brand name Bufferin doesn't mean it's going to be an exclusively or primarily acetylsalicylic acid product. Eve Quick, for example, contains a sizable dose of magnesium oxide (analgesic, antacid) as well as the ibuprofen present in original Eve A.

As for the antacid present in Bufferin, I have my own guess as to why it's present in the drug. Read on: 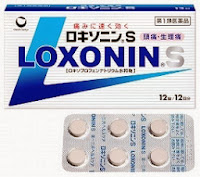 Loxonin [Type S] (ロキソニンS)
Generic Name: loxoprofen sodium
Loxoprofen is a pet development of Daiichi Sankyo, who has secured the rights for the compound (or their process of compounding it, anyway), and markets it in Brazil, Argentina, Mexico, and India, as well as Japan.

Loxoprofen is a drug not approved for use in the US--not necessarily because it has been found unsafe, but just because it has not been lobbied through the FDA approval process yet. The drug is in the same class as ibuprofen and works in the same way, producing an anti-inflammatory and analgesic effect by interfering with an enzyme in the body that stimulates inflammation. (For pharmaceutical junkies, it is, along with the other two drugs on this page, a non-selective cyclooxygenase inhibitor.) As with ibuprofen and aspirin, it carries the same risk for gastrointestinal side effects like diarrhea, gas, or an upset stomach. (This is the reason I presume the basic Bufferin formula also includes an antacid.)