Maybe you're already aware of the major regulatory distinctions of cars in Japan: bigger cars with bigger engines get white license plates, smaller cars with smaller engines get yellow "kei" plates, and scooters and the like get even littler plates. But there's another, less common classification... or perhaps "loophole" is a more fitting term. It's called a ミニカー (minicar).


Minicars Defined
Minicars are little-engined things (that is, 50 cc or less) that also meet one of the following definitions: 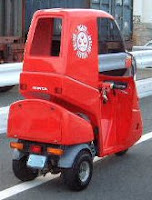 ...wait, what? Why go to the trouble of distinguishing the first and third definitions? Well, this is where the minicar gets tricky. See, some scooters (aka. mopeds, 原付 gentsuki) have three wheels. You may have seen them on the road delivering pizzas or takoyaki or whatever delivery food is in style in your region. They've got three wheels, a little awning and windshield to keep the rain out, and a lockbox on the back that can be filled up with delicious traveling foodstuffs. But the government wants to insist that these are not minicars. They're just heavily modified gentsuki.

License to Drive
And that means that only a gentsuki license (different from a car license in that it can more cheaply and easily obtained, at 16 years of age instead of 18) is required to drive them, a helmet is required while riding on one, and they must follow the special gentsuki driving restrictions such as always staying below 30 km/h and making hook turns at designated intersections.

(A minicar, on the other hand, requires a standard car license, no helmet, can run at up to 60 km/h if its engine can handle it, and may make right-hand turns as a car does.)

The standard license, by the way, is required because a minicar is potentially able to, unlike a gentsuki, have a round steering wheel, travel in reverse, and occupy a full lane while driving. And because of the license required, a minicar's driver must display the 初心者 (shoshinsha) mark if he or she has been driving on a standard license for less than a year.

Traffic Infractions
Driving a minicar thus also carries more legal responsibility than driving a scooter: Traffic infractions are handled the same as infractions in a white- or yellow-plate car. Penalties while on a gentsuki are lighter. And though gentsuki drivers are treated as pedestrians when they disengage their vehicle's engine and walk it, this is not the case for a minicar. Neither minicars nor gentsuki can legally carry passengers or drive on expressways.

Insurance and Tax
Minicars are cheaper to insure and are taxed less than normal cars, but they're a bit more expensive than their scooter counterparts. For comparison:

Neither the gentsuki nor the minicar require 車検証 (shakensho), eliminating need for obnoxious biennial 車検 (shaken) gamuts and verification of a parking space by your local police authority. 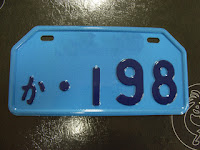 Minicars, to wrap things up, get a special blue license plate. I mean, come on. Blue! Plenty of Japanese people don't even know that color of plate exists! If you've ever wanted to own an ATV in Japan, this is the classification under which it will be licensed. Yes, it will therefore be legal to drive on the road (up to 60 km/h, hah) and no, apparently you're not legally required to have a helmet on.

Phew. The vast majority of this information comes thanks to this very informative page on distinctions among Japanese license plates. If you haven't already, be sure to check out our AccessJ post entitled "License Plate Trivia" as well.