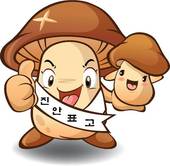 You'll notice many types end with the letters "take" and kanji "茸". This literally means "mushroom", although the common word is "kinoko" or "きのこ". The preceding kanji is usually the name of the tree on which that particular mushroom grows. 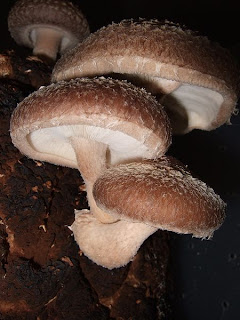 1. Shiitake 椎茸
Everyone's heard of these. As famous as they are widely available. Grows on the 椎 tree (shii, a type of beech). Not particularly expensive in Japan (and becoming cheaper in the West). Lovely squidgy texture and meaty flavour. Often sold in dried form, and re-hydrated as part of the cooking process. This apparently makes them taste nicer, too. Served in every form you can imagine, from raw to tempura.


2. Enokitake 榎茸
Horrible, long spindly clumps of matter with virtually no taste. Found everywhere, including between your teeth for the rest of the day. Very widely available, popular and cheap. Has a texture something like konyaku noodles - crunchy and slippery. It's quite common for children to grow these mushrooms much like we would cress in England: because it's easy. 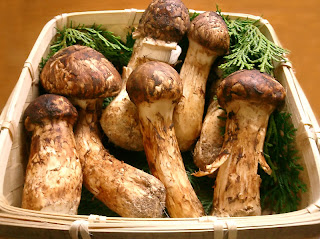 3. Matsutake 松茸
Rare. Can't be grown "in captivity". Pops up on mountains and other hard to reach places. Incredibly expensive and highly prized. Looks more than a bit like a penis until the gills open (and should ideally be eaten at this stage). Tastes alright, especially when cooked with rice in the rice cooker, but the price is severely unreasonable. 4. Shimeji シメジ
Comes in two varieties - the white and the brown. The white were selectively bred and "copy-written" to Hokto a billion years ago. The flavours are very similar. Pretty firm, with a non-remarkable mushroomy taste. Very common and relatively cheap by Japanese standards (about 120yen a pack). For some reason the very look of these clumped-together mushrooms makes me feel sick. Reminds me of a miss-spent youth I suppose. Look like a troubled alien landscape. 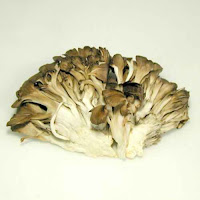 5. Maitake マイタケ
The monolith. Grows to enormous sizes and resembles a terrible skin disease. Again, very popular, and comes in brown or white. Perhaps the cheapest choice (about 70yen/100g) Thought to be some kind of elixir. Also common outside of Japan under various other names (Sheep's Head etc), especially America. A bit chewy. Tastes alright, I guess.