Next in our textbook bonanza, let's take a look at the characters appearing in the six new junior high English texts.

New Horizon
Art Style: Educational comic book.
The ALT: Female. From the US.

Right off the bat we've got New Horizon. The recurring cast here has been pared down to the basics: Two Japanese and two whiteys, a boy and girl each. Canada, Australia, and the US are represented, leaving at very least the UK's absence conspicuous. And a bit of multicultural afterthought seems to have provided us with Singaporean twins Bin and Mei at the bottom. My favorite part here, though, is the inclusion of Becky's sassy, journalist grandmother, Nancy. 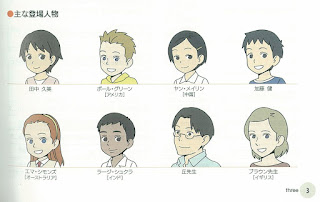 Next on the list is New Crown. We already beat this into the ground in a few articles last year, but New Crown is all about global awareness: "Save the 1) dolphins, 2) rainforest, 3) ecology, 4) disappearing indigenous cultures of the world." Pick one. New Crown's probably got it covered, and it's got a cast of characters to match, special care taken to represent emerging super-economies India and China. Note also the spacing of the characters here. They don't put the Japanese characters and the white characters together, like New Horizon above. No, New Crown is a literal melting pot of fertile young minds. 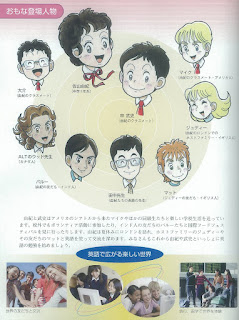 The balled-ear, puffy-cheek Atom Boy monstrosity here puts the Japanese couple, Yuki and Takeshi, right up front. In fact, there's even a third Japanese student in the cast, but as everyone on the page is described in terms of their relationship with Yuki, I'm not sure what relegates him to minor, outside-circle status while Takeshi gets center stage. Other cast members are identical (but separated and sent to different countries at birth) twins Mike and Judy, mullet-sporting redhead Matt, and token non-white character Balu from India.

Check out next week's installment for Total English, One World, and Columbus 21! What bland nationality combinations and non-threatening female ALT characters await?! We'll let you know when it's up on Facebook and Twitter.