Total English
Art Style: The Most Generic Anime.
The ALT: Female. From Canada.
Despite unimaginative characters (really, I think New Crown is on a good track; if only they didn't shove their agenda down the reader's throat), the art style in Total English is going to be most appealing of these books to the eyes of a seventh grader. For that reason alone, it's a shame this book isn't more widely used. Again the two Japanese characters are front and center, flanked by just one whitey this time (American-bred Jack Smith) on the right and Indian girl Maya on the left. Maya. What a great idea: Pick a cute name for the Indian girl. You know, instead of something hard for the Japanese students to take seriously. Like "Ratna." 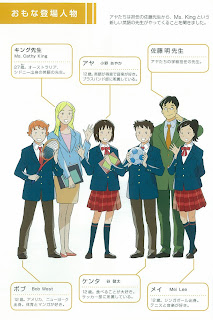 Saving the world one mind at a time, One World's also sticking to a basic formula. There are two Japanese kids, plus Bob from the US and Mei from Singapore. Of note here are the descriptions given of the Japanese students: They have katakana nicknames so that all the students can be in the same league. Mei, for her part, doesn't get a trite,  "she's Chinese" kanji name, and even better, she visually passes for a Japanese student instead of looking obviously foreign.

Columbus 21
Art Style: Fauvist.
The ALT: Female. From Australia (though it takes them another dozen pages to tell us that). 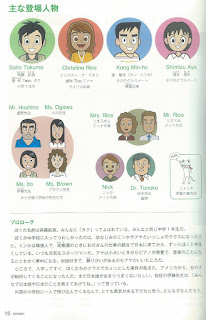 If you have a thing for piercing oval eyes and an unpredictable fourth wall, Columbus 21 is the book for you. Here's two more Japanese kids, one each for girls and boys to identify with, but this time Taku's got a patch of freckles, making him look a little less stereotypically Japanese. Min-ho hails from Korea, a rare choice among Japanese textbooks, and Tina, though from the US, isn't automatically white. Though I entirely expected one chapter to be about Tina's ethnic heritage, the writers diligently portray her family as very obviously American. They eat nothing but toast and pancakes at the breakfast table. Columbus 21 also has the distinction of pursuing some serious subjects, and they aren't absurd (like New Crown). Halfway through the first book, for example, Tina becomes depressed and stops going to school. Her recovery is never clearly addressed in the text, but apparently the Zoloft kicked in, because she's back to her wide-mouthed smiling antics by the end of the year.

What else awaits in the wacky world of Japanese textbooks? Join us in our next installment! We'll let you know it's up on Facebook and Twitter.