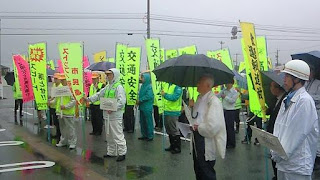 If you have operated a vehicle in Japan, there is a good chance that you have had some dealings with the Japan Traffic Safety Association (zenkoku kotsu anzen kyokai 全国交通安全協会) or some of its member groups. Since there aren't many English language resources available, let's take a closer look at this mysterious organization.

The JTSA and its member groups also handle a lot of duties traditionally delegated to law enforcement such as driver license training, collecting dues for car parking registration, and so on. The exact nature of their involvement with local law enforcement differs by prefecture, but they often work very closely with law enforcement and can even incorporate active duty officers alongside regular staff.

So What Do They Really Do?
At least twice a year (usually in the fall and summer), you have probably noticed an inordinate amount of police officers, old folks, and soon-to-be-up-for-reelection politicians standing at intersections holding flags and even mini-roadblocks while others hand out "lets drive safely" tissue packets. This means it is Traffic Safety Week and for these 7 days the police will suddenly start caring about whether or not you blow through that red light. For all this, you have your local Traffic Safety Association to thank.

What is more, when you go to renew your Japanese driver license (check out our guide here) you are legally obliged to take a re-training course. This course is offered exclusively by your prefecture's Traffic Safety Association. As such, the bulk of your license renewal fee is actually payed as a class fee to the local TSA.

In my jurisdiction, the local area TSA also operates the traffic consultation desk at the police station and sells revenue stamps used for paying for police services. They also work with another NPO responsible for verifying parking spaces.

Some Problems
Now, if you think that being an ostensibly "non-profit group" that works hand-in-hand with the government might cause some conflicts of interest, then you are absolutely one hundred percent correct. With a little help from Japanese Wikipedia, let's find out where the TSA goes all wrong: 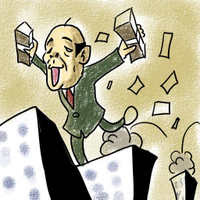 So does your local TSA actually do any good? In this author's opinion, absolutely not. It is one of the more egregious examples of Japanese political amakudari in action and, to top it off, the TSA has rigged the system such that you have to utilize their services in order to continue driving legally. While the awareness building campaigns might have helped to prevent accidents here and there, the whole institution seems to be more of a retirement slush fun for public officials who are already entitled to hefty pensions. But, hey, that is just one man's opinion...