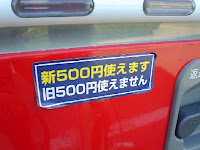 You have probably seen this sticker or some variant of it--though you may not have properly noticed it or read what it said--on a vending machine in Japan. It is almost ubiquitous these days.

It tells you that the vending machine will accept new 500 yen coins, but not old ones. That's because old 500 coins were susceptible to easy counterfeiting, especially in vending machines.

Today, as a follow-up to Dom's wonderful guide to Japanese coins, let's learn a bit about the history of counterfeit 500 yen coins in Japan.
First, let's take a look at the difference between the old and new 500 yen coins: 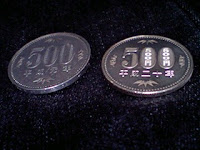 With minor changes most easily seen from an angle, the new 500 yen coins can be distinguished from their older counterparts by the filled in zeroes and serrated edges, old coins having smooth spaces inside the zeroes and smooth edges. As Dom noted in his article, there are also letters spelling out "NIPPON" written in tiny font inside the digits, though it takes time to pick them out with the naked eye.

This "new" 500 yen coin came out in late 2000, having been hastily issued by the Japan Mint in response to a social problem that erupted in the late 90's.
(Incidentally, said mint's coin production branch just so happens to be a few minutes' down the street from my house.)

So what was this social problem?

Entrepreneuring young counterfeiters, upon discovering this bit of happenstance, went to work. The fruits of their labor were a very clever, and very illegal, method of extorting cash a little at a time from vending machines across the country. (Read on in part 2!)