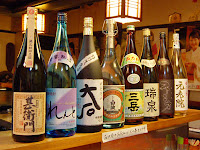 Spend enough time in Japan and you will likely develop a healthy love-hate relation with shochu (焼酎). As any seasoned ex-pat knows, when the sochu bottle comes out, you are almost certainly on a one way trip to Hangoverville, population: you and the toilet.

But if you are one of those people who actually likes to savor their sochu as opposed to using it as a cheap binge drinking accessory, then you are in luck as there are tons of local varieties avaliable to please your pallet.

What is Shochu?
Shochu is sometimes known as "Japanese vodka." Probably because it is often made from distilled potatoes has a clear, water-like appearance. However, the fact of the matter is that shochu is actually, according to Japanese law, its own special class of alcohol. Moreover, it can be fermented from sweet potato, rice, barley, or even some types of sugars.

Generally speaking, it has more alcohol than sake and less alcohol content whiskey and other hard liquors. Shochu is commonly used as mixer for everything from the ubiquitous cans of fruity chu-hai (チューハイ or "shochu highballs") cocktails to Chinese tea.

Flavors differ depending on the brewing method and ingredients, but shochu generally is subtle and earthy with a distinct aroma.

In order to to keep the shochu title pure, producers have successfully lobbied the government to allow for the special designation of honkaku shochu (本格焼酎) or "genuine shochu." Honkaku shochu usually comes from Kyushu and is regarded as higher quality.

The two basic types of shochu are designated as shochu kori  (焼酎甲類) which is usually made be large distillers and has less alocohol while shochu otsuri (焼酎乙類) has a higher alcohol content and is considered higher quality. Some producers will mix kori and otsuri brews (konwa shochu 混和焼酎), but according to new industry guidelines, bottles much list the type and quantity of the blend.

The most common types of shochu are as follows
Awamori
Another sub-genre of shochu that is worth mentioning is awamori (泡盛). The hard hitting awamori originated in the Ryukyu Islands which is the present day Okinawa Prefecture. While legally classed as a shochu drink, it is made using a different brewing processes involving rice endemic to the Ryukyu Islands.

There are no legal restrictions on where awamori can be brewed but international and domestic trademark laws restrict the use of Ryukyu Awamori (琉球泡盛) to breweries in Okinawa Prefecture.


Local Sochu
Unlike local beer (ji-biiru 地ビール) and local sake (ji-zake 地酒), there is no proper local shochu (ji-shochu 地焼酎) brewing association. This is likely due to the fact most ji-shochu is concentrated in southern Japan, especially Kyushu and Okinawa. Oita Prefecture is one of the largest producers of high quality sweet potato and barely based shochu.

Unfortunately, there isn't a comprehensive listing of breweries throughout Japan. However, there are some specialty internet stores such as Kyushu Shochu Net that carry an impressive selection of local shochu. Other big shochu producing prefectures like Niigata have online specialty shops as well. As is the case with other local brews, the internet is the best way to get your hands on some hard to find items.

If you are not discerning, Just about every store that sells any sort of spirit will have shochu, often times in multi-liter quantities. Even big grocery chains will generally have several smaller brands of shochu  and possibly some local selections.

As for awamori, you may have to look a bit harder. While not exactly rare, proper Ryukyu Awamori tends to be on the expensive side and is not as commonly stocked as the garden variety stuff. Your best bet is to look in a specialty liquor store, especially one that has a big shochu selection. Of course, there are sites like awamori.com if you are feeling lazy. And if you feel like learning more about real Okinawan awamori then look no further than the Awamori Meister Association.


Once you wake up from your hangover, make sure to check back with AccessJ for all your booze and non-booze related Japan info! And don't forget to check us out on Facebook and Twitter!