5 Salad Dressings to Try in Japan 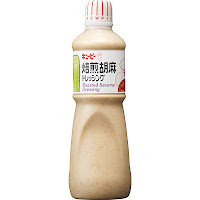 Cutting the crap and going straight to the list:

A number of companies put out creamy roasted sesame dressings in Japan. I like all of them quite a bit, and usually the store's generic brand just as much as the well-known Kewpie brand. This is also one of the few flavors your grocery store is likely to stock in a large container, by which I mean a container that will last for more than just five or six salads. If you are interested in other flavors of dressing in larger containers, quite a variety is available on Amazon.co.jp

"Non-oil" (ノンオイル) is the designation among Japanese salad dressings equivalent to "low fat" in the US, and like "low fat" dressings of the US, they're kind of expected to suck compared to their oily counterparts. One non-oil dressing that I like a lot, though, is this 中華ごま dressing put out by Riken. This one especially goes a long way on the nothing-but-cabbage kind of salads often served in this country. 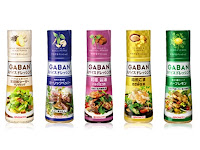 I am not a huge fan of the Gaban series, but a few of my foreign friends here rave about them, especially the garlic pepper flavor. I should clarify--I don't care for the Gaban dressings on salads, but some of them are pretty awesome for basting onto yakiniku. The Gaban series dressings are thicker salad dressings with strong and "Western" flavors that are otherwise fairly uncommon in the average grocery store, such as herbs & lemon or balsamic vinegar. If you don't like Japanese dressings because they're just too different from what you were used to at home, this line is certainly worth a try. 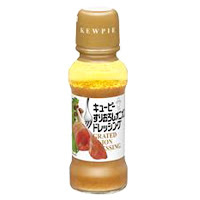 By far the dressing I have been most impressed with is Kewpie's すりおろしオニオン dressing. This stuff tastes great and goes well with a wide variety of salads, and even makes eating a huge heap of sliced cabbage look attractive. A bigger bottle than what most supermarkets carry is again available on  Amazon.co.jp, so if you try it and like it as much as I do, ordering bottles can cut a little off the cost.

One final, less traditional source of good salad dressings are your local chain restaurants. For example, I really like the wafuu dressing at Coco Ichi, the curry shop. Turns out that most Coco Ichi restaurants keep a small display up at the front of the shop where packaged curry rues as well as the house dressings are available for sale. Family restaurant chains, especially ones with Italian themes like Saizeriya, also often have messages at the bottom of their menus stating that house dressings are available bottled for sale and private use. If you find a dressing that you really like while you're eating out, ask the waiter if bottles are available for sale. Even if it isn't displayed at the front of the store or on the menu, at mid-range establishments the dressing is likely coming out of a bottle in the restaurant's kitchen, and you may be surprised at how accommodating many establishments are.

So, enjoy, and happy salad-eating!