Why Are Japanese Houses SO COLD? 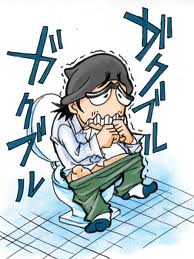 I feel your pain. It was -1C in my room this morning, with ice on the inside of the windows.

After writing about how to warm up your house in these cold winter months, I realised that perhaps we should cover exactly why the Japanese house is such a freezing nightmare.

Here's your answer: they aren't insulated.

The reason for that is quite interesting, I guess:

As you will know if you've ever been to a traditional Japanese house, the old-time heating method was a simple fire in the middle of the room where the cooking was also done. In more recent times the primary method has become kerosene electric-heaters. The problem with both of these techniques is and was that potentially poisonous fumes are released (though of course much less significantly with modern stoves).

The architectural solution to this (and simultaneously the humidity of summer) was a house design which drew air up from under the house and deposited it (and the acquired heat and bad air) outside. That's why there's a cavern of unused space under the floor in most houses. In olden times there was a large vent in the (very high) ceiling, whereas more recently we can see smaller vents above doors, hollow walls and a massive mysterious tanuki den of unused space in the roof.

The freezing house this (and the single-pane glass doors everywhere) produces is one of the reasons why Japanese families traditionally shared one tiny room. The small space is easier to make and keep warm + sharing body heat = almost adequate standard of winter living (?). 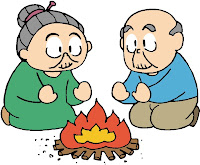 As I already mentioned I wrote about some solutions to this lack of insulation, but now I'm coming round to the idea of just spending the winter evenings in an izakaya or an onsen. Or if you have a heated toilet seat, like more than 50% of people here do (but not me), maybe you should just spend winter sitting on that with a cup ramen for company. You could even move it to your sofa instead of those hideous electric blankets.

Why the more modern houses and apartments still have this design and lack the central heating and double-glazing which the rest of the world has heartily embraced is something of a mystery. For me the kotatsu doesn't cut the mustard as a solution, and I don't particularly want to spend my winter days dressed in a muu-muu. I'm tempted to move to Hokkaido just for the possibilty of proper insulation.

So how do you stay warm in the winter? I'm getting sick of the ying-yang of being punched in the face by kerosene-scented air then doused in a magic moist breeze blowing through the window panes. Let me know in the comments.