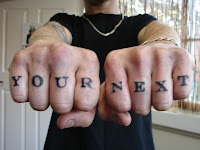 After getting so angry about the five worst pages in New Crown last month, and then later the 4 most annoying characters I thought I had let off just enough steam to get on with my life.

Unfortunately, when I next picked up New Crown 2 it flopped open to Pot of Poison and I realised my work was far from done. "You're bad," I thought, "I must punish you."

Without further ado, here are some terrible editorial decisions from the NC team.

Based on a reportedly beautiful book by award-winning author (not to mention humanitarian superstar) Luis Sepúlveda, NC2 manages to capture absolutely none of the skillful writing and scene-setting which earned the original book sales of 2 million copies.

Simple stories are fine for learning English, so why not pick one? Why chose a novel famed for it's emotional content and reduce it down into 4 half-pages of vacuous rubbish? Why would you do that?

Perhaps my next project will be re-writing Philadelphia in 4 words:

How's that? Or how about Inception: 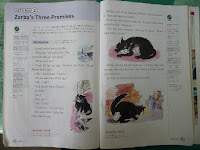 In this story, an oil-covered Gull splats into the ground next to a cat (Zorba). The cat doesn't like the taste of oil, and is just lazy enough to listen to the gull's life story. Turns out she's dying, but has an egg up her arse which must continue her family legacy of stealing food from infants and picking at the carcasses of pigeons. After making the cat promise not to eat the egg, she dies and farts it out. The cat looks after it, defends it from rats etc and it's all very lovely and darling. 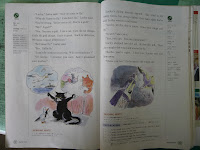 My biggest beef with NC's terrible retelling is it's daringly touching acceptance of individuality. "Cats do cat things. Gulls do gull things." replies Zorba to Lucky (the baby bird)'s complaint that she can't spend all day sleeping, crapping in my flowerbed and pissing on my sofa. Oh how sweet, how educational. We're bringing our children up right! No more war! Free Tibet! Eating endangered species of whale is barbari...

Then the bird flies off leaving out feline hero to murmur "I love you" to the empty sky. What a heart-warming story... "Lucky" didn't even stick around to hear Zorba's last words! Lucky? More like Bastard, am I right?

It only affirms my view that seagulls are the rude-boy gangsters of the bird world. But what else can you expect from a foetus which fell out of the lifeless corpse of it's mother. Summary: It's like that manga Berserk, except with no massive sword and everyone's a dick except the black guy. 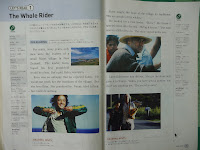 The award-winning film becomes a four-page epic in NC3. And boy, is it a good one.

How on Earth do you explain that? 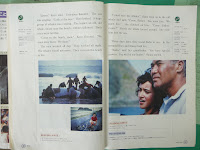 The story itself isn't so bad, apart from giving women ideas above their station (right fellas??), and probably strikes a chord somewhere within Japanese society. But come on. Something a little more fun?

Whatever, I don't even care anymore. This crappy story full of crusty old goats and predictable Ocean Odyssesy morals can go to hell. 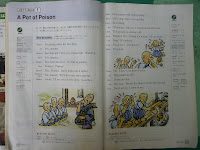 NC2 decided to teach grammatical structures for "going away" and the ever important "full of" through the medium of a bad Three Stooges remake. Perhaps I should apply for a job. I'm full of ideas. How about a Chuckle Brothers remake for first graders? We can laugh at the frantic spazzy flailing of total morons while learning the immortal constructs of "to me" and "to you". Or perhaps we can use Roadrunner cartoons to illustrate "died from" and "killed by". 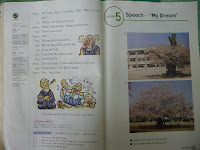 A Pot of Poison is awful. Our three anti-heroes are trusted with not touching their master's pot of poison whilst he's out of town. Down's-Syndrome inflicted An manages to knock it over during cleaning time and spill the poisonous contents, which total prick and ever-ready ADD opportunist Kan immediately shoves in his mouth because it resembles honey. It turns out it actually is honey, which is good news because Huey, Duey and Luey have eaten it all. Sly fox Kan then smashes the pot and smears blood on An's face to make it look like an accident (without the blood), while desperate drama-queen cave-painting Chin relentlessly freaks out like he's auditioning for Will and Grace.

Inevitably the master returns, and is understandably pissed off by the fact that he can't trust his disciples not to knowingly kill themselves if given 72 hours alone. All's well that ends well, however, when Kan deftly reports how they've punished themselves for breaking the pot by eating the poison! Kan, you joker! Of course, it turns out the only person dying today is Master when he realises what a terrible trainer he is and commits seppuku to an aging portrait of his grandfather.

The only good thing to come out of these three pages is the alteration my student made to page 42; which shows the three douches vomiting red and black gunk all over Master's wincing face.


That's all I can bring myself to write today.