The 5 Most Common (English Teaching) Gaijin Stereotypes in Japan 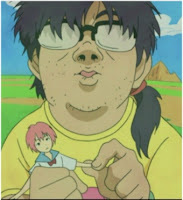 Japan has very few foreign residents compared to many Western countries. There are quite a few Korean, Chinese and Filipino citizens, but a lot of them pass undetected even by the Japanese. In fact, if you look even slightly Asian expect to be treated like you were born and raised here (but the truth will out!). If, however, you look like the rest of us expect a mixture of over- and under-estimation by the people you meet.

I'll write a separate post for the language barrier and embarrassing convenience store moments. For now, let's start with the types of people who you can expect to meet teaching in Japan.

Beware: sense of humour is required:

1. You were expecting it, and here it is: Japanophiles by the bucket load. You can spot these "people" by their annoying whiney voices and piercing Japanese over-familiarities. Their shamelessly sickly-sweet jerkoff of a personality SUCKS. They actually aspire to be otaku.

But here's possibly the worst part: be prepared for the jaw-dropping ability for the males to actually physically attract Japanese females! If you were on the fence about the existence of God this will make you finally turn away: the ideal man in Japan is fair-haired, tall, pale and very skinny. Shudder...

Personality and geekiness don't seem to register, or are just seen as cute. Female gaijin, on the other hand, may not be so lucky. I have no idea why, but apparently only Japanese women are completely blind when it comes to sexual attraction.

Apart from their awful personalities, another problem with these people is their lack of teaching ability. Their number-one interest is anime and manga, and their insistence on making lessons revolve around that is a serious fault.

Most of their non-anime time is spent doing 100% Japanese things, like awkwardly dressing up in kimonos, buying swords and playing with puppets. They will suck up Japanese friends like an industrial hoover, yet probably won't say hello to you fellow gaijin in the street. What's that about?

2. The academic fella. Usually a guy, this teacher has high hopes of mastering Japanese and going back home to study it further "or something". There are a fair few of these but their existence is a natural progression from coming out here, and perfectly understandable.

In fact it would be hard to have any problem with them at all if it weren't for their dislike of teaching. Teaching isn't easy to do well. Anyone can sloth through it and earn the money, but making yourself useful and genuinely helping people learn is your job, and learning Japanese isn't. The few that can straddle the two camps deserve a lot of respect and are often very nice people too.

3. Travel C***s. If you've ever been backpacking you will know all about these people (unless you are one). They think of themselves as new-age hippies of the world, the presumption of which is probably worse than if it were actually true. Their "random" humour is little more than irritating, and their lack of originality or personality is a nasty downer. Thankfully their numbers are relatively low. Bear a resemblance to:

4. Party boy/girl. Takes the worst parts of 2 and 3 and adds a total disinterest in anything cultural or language related. They come to the big cities for the big monies and the female attention. They drink, they party, they score and they piss all over Japanese customs and sensibilities. They beat a horrible path through Japan leaving a slug-trail of stolen glasses, piss stains and puke, making a bad name for the rest of us foreigners. Selfish bastards is what they are.

5. One more, pretty sad, one is the Lonely Guy With A Beard. He clearly has some emotional problems and has had his heart broken one too many times. He moved to Japan to rediscover a reason for living, and despite looking like he was pulled out of an impounded VW Beatle this morning he has somehow managed to acquire a Japanese wife (although to be honest she's not much of a looker). He's harmless but makes you feel miserable by not having much to talk about and invoking harrowing images of how you could look in 10-20 years time.


.....and now you can identify 80% of Western foreign residents teaching English in Japan! But don't let that put you off too much. The other 20% are people who we might condescend to call "normal". People who want to see a different culture, or just want to teach and have chosen to do it somewhere which is not home. I've met some good friends here (and I, of course, am shockingly amazing), so don't be too scared.

And of course there are 120 million Japanese people just waiting to be your friend. Except most of them presume you're a dumbass who can't use chopsticks or eat raw fish, let alone speak any Japanese. But don't let that put you off either, most people anywhere are idiots... right?

ANYWAY, come one, come all! Just make sure you find the right job first!