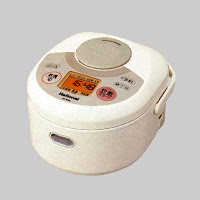 One of Japan's little cooking miracles--if you like rice--is the rice cooker. It's a fire-and-forget solution to the staple food of Asia: No more waiting for water to boil on the stovetop. No more setting timers to make sure your rice doesn't under- or over-cook. No more burnt rice stuck to the bottom of the pot or trails of white rice-residue to scrub off the side of your pot and off of your range.

If you live in Japan, you probably already have a rice cooker. And maybe the person you inherited the cooker from already told you which button to push to "make it go." But, have you ever wondered what those other three buttons on the cooker do? Today we'll learn how to use your rice cooker, and along the way, you might find out there's more functionality, even in little budget cookers, than you thought: 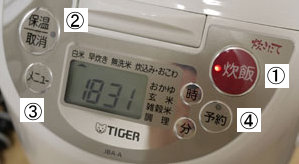 Although the cooker I chose to display here may not look like yours, chances are the buttons are the same. Rice cookers really only have about 4 or 5 basic buttons. (Although rice connoisseurs always have the options of more functions and greater price.)

So, what to these all do?

Some other tips to keep in mind when dealing with Japanese rice cookers are that rice in Japan is measured using a traditional unit system: One "cup" of rice in a rice cooker is actually 一合 (ichi gou), which is equivalent to about 180ml of dry rice. It is not the same as 一カップ (ichi kappu), "One cup." Learn more about Japanese cooking measurements here.

Also, a fair number of Japanese enthusiasts experiment with cooking things other than rice inside modern rice cookers. For example, it is perfectly possible to make (thick) pancakes and birthday cakes within a rice cooker using the proper recipe.