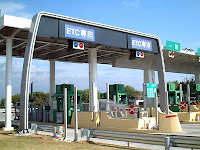 Starting in April, 2011, highway drivers in Japan can rejoice. The Ministry of Transport* announced last month its new toll policy for use of the country's national superhighway system (高速道路). Pretty much everything, unless you are a professional trucker, gets cheaper.
*(that is, "The Ministry of Land, Infrastructure, Transport and Tourism")

Let's take a look how:

Until now, tolls on the superhighway system have been calculated by distance traveled, and there has been a fairly long list of targeted discounts that drivers can use to reduce their toll. The most widely known discount is the 休日上限, which caps a single trip's toll at 1000 yen on weekends and national holidays. But, other discounts, such as commuter discounts (50% off distances under 100 km during commuting hours on weekdays) and late night/early morning discounts (50% off all travel commenced or finished between 10 p.m. and 6 a.m.), have also been automatically applied to relevant tolls. Until now, these discounts have only applied to ETC system users.


The weekend discount, however, will continue to apply only to cars equipped with an ETC reader, and herein lies the loophole that continues to make ETC worthwhile to own: Cars who travel on weekends and pay in cash are still subject to the entire regular toll based on the distance they traveled without any caps or discounts.

So, that covers the bulk of it. There are some further details regarding specific superhighway lines and toll roads which are not part of the 高速道路 network. (For example, use of the Tokyo Aqua Line, a bridge-tunnel between central Tokyo and rural Chiba, is subject to its own fare system.) To check out all the other details, check out this Car Watch link (Japanese) for a simple run down or this exhaustive, mind-boggling PDF press release from the Ministry of blah, blah, Transport and blah (also Japanese) for complete explanations of all changes across the country and rationalization for said changes.

(By the way, former discount systems, such as the commuter discount and late night/early morning discount, will continue to exist and apply to commercial drivers. So, if you are a professional driver in Japan, pretty much nothing changes for you in April.)