As anecdotal as it seems, there are some hangover preventative drinks which you can buy in Japan which do actually work to limit your hangover the day after drinking too much. I recommend (though I can't stand the taste of it) ウコンの力 (ukon no chikara):

This is a combination of turmeric and many of the vitamins you lose during a drinking session.

200yen. One before drinking, one at the end, happy next day (within reason).

There are loads of other drinks you may want to try, each advertised as miracle injections of your body's vital elements, usually containing maca, turmeric or some other witch's torture root. 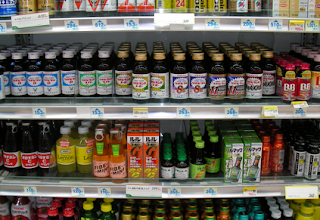 Of course, hangovers are mainly caused by the level of poison in your blood... but there are some common-sense things you can do to limit the pain caused by a lack of something rather than an excess.


Not averse to taking things to another level, the Japanese doc may recommend an injection of B1 and C. If you feel like your hangover is bad enough to go to the doctor about, then maybe that's the option for you. Good luck getting there.

Anyway, happy drinking. And anyway, if you don't wake up on the street with sick on your head, using your wallet as a pillow, that's a successful night out.