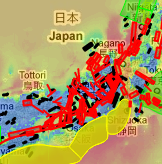 This latest link is an incredibly detailed (because it comes from the Japan Seismic Hazard Information Station) map of the true "Danger Zones" in Japan.

On Tuesday we published a map which indicated the strength of vibration of different parts of Japan based on the surface type. However, it was misinterpreted by some as an indication of where quakes were most likely to occur.

In response, this is exactly that.

This map allows you to view, in terrifying detail, the varieties or seismic faults in any region of Japan. You can also see details of all local landslides, large or small. The amount of detail available probably requires a doctorate to interpret properly, but you can get a pretty good idea of the lay of the land with the various options.

With everything switched on, it looks more like a psychologically damaged child has attacked a map of Japan with their felt-tip collection that anything scientific. Anyway, hope it's useful. Here's the link:

Email ThisBlogThis!Share to TwitterShare to FacebookShare to Pinterest
Labels: Earthquake