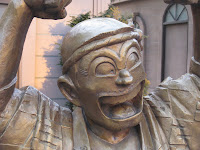 Kameari is the site of possibly the most famous anime and manga in Japan: こちら葛飾区亀有公園前派出所 (usually shortened to Kochikame and referred to as Kameari Park Precinct in English). It's the longest running manga series in Japanese history and centres around a police box (koban) outside a small children's park in Kameari.

I went there last week and thought you might like to know about a walk you can do around the (lovely) area. It makes a unique couple of hours to add to your experience in Tokyo. 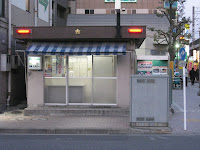 The koban itself doesn't actually exist in the location from the series, but a similar one which inspired the design sits just outside the station. Very nearby are two bronze statues - one, life-sized, of the main character Ryu, and one smaller one of another character, Reiko. These two are part of a series of 11 statues around the area. Each one has a map nearby to help you find your way around, and it's very simple.

Seeing all the statues and the koban will take you around an hour, or a little more if you take your time and enjoy what is a very nice area of Tokyo. 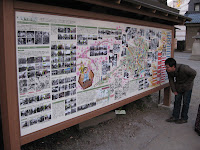 If you're a fan of the series, you may well spend a bit longer in the area checking out the memorable locations and buildings which you will have come across in print/on TV. The shrine along the route has a huge billboard with a fabulously detailed map of the area cross-referrenced with scenes from the comic.

The huge shopping centre near just North of the shrine also has it's own dedication in a reconstructed faux-koban, and several shops along the route sell souveniers. 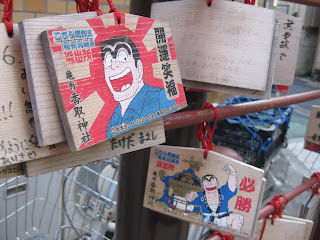 Access
Kameari station is on the JR Joban line, and with a couple of changes from Shinjuku in about 40 minutes (500yen), or about 20 from Ueno (310yen).