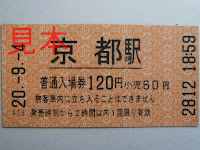 A while ago a friend of mine came to visit from the US. It was his first trip to Japan. As he was without a cell phone, we spent a little more time than usual planning how we'd meet up. He told me which train he'd be riding on, and I started to explain the layout of my station--how to exit from the shinkansen area instead of transferring to a local train, which exit I'd be waiting at, what stores were in the area, where the payphones were if he couldn't find me... the conversation got a bit bogged down until finally I realized, "Oh, duh. I can just meet you as you step off the train."


For every time you've wanted to go inside a train station but not actually take a train anywhere, JR (as well as many private lines) has got you covered. The name of the ticket is the 入場券 (nyujouken), the "entrance ticket," or in perhaps more fitting English, the "platform ticket."

The ticket is a way for people to meet and send off friends and loved ones just a little farther into the journey than the station's entrance wickets. It's not a big practical difference, except perhaps in the case of a young child or a friend like mine who wasn't used to Japan, but for some, the sentimental value is worth the few extra yen spent.

And just how much does that sentiment cost? Usually the 入場券 for a local train station will run from 100 to 150 yen. Shinkansen platforms also have 入場券, and again each station has leeway to determine its own platform ticket price. But even a shinkansen platform ticket will rarely exceed 200 yen. My last one was 220 yen, but Tokyo is just 130 yen, Osaka 120 yen, and Nagoya 140 yen.

Aside from seeing off friends, the platform ticket allows you access to the shops located within the station. Usually there isn't a big difference in the souvenirs sold there from the ones sold just outside, but occasionally there's a special or popular store exclusive to the inside of a station.

I also met someone who claimed that every time he went to Shinagawa from his home in Western Japan, he'd just buy the 入場券 and then shoulder his way through a crowded wicket at the exit station, getting himself an almost free ride for a route that should have cost him 14,000 yen or more. As I got to know that guy a bit better, though, I realized most of the stories he told were just that. When I once traveled with him to Tokyo, he bought all his tickets as usual. :)

But perhaps the most inventive use I've heard for the platform ticket is as a family outing: Kids--or at least a huge number of kids here in Japan--love trains. And bullet trains are one of the coolest varieties. Instead of spending an average 5,000 yen a head on a day trip to Tokyo Disneyland/other generic, cramped, neophile Japanese attraction, during half of which your toddler will be complaining about the sun and the lines, why not take the family out to see the bullet trains? If your child is the right age, this trip is a blast, it's light on the wallet, and it won't be too hard to find a place to sit or a place to eat without a line. "You wanna go see the trains today, Toshi?!" (And seriously, they are pretty cool to watch for a while.)