This is another great group game which involves the whole class interacting with the JTE and ELT.

You will need dictionaries for each group, and some dice.

Keep going as long as they are enjoying it, which can quite conceivably be all lesson.

Similarly to the Typhoon Game or Snail Salt Chopstick Attack, Snake Eyes involves drawing as many snails or houses on the board as possible. In fact, any certain-number-of-strokes picture is fine. You could use the kanji for English or something else, or an image of some sort. I find the snail and house to be pretty straightforward. 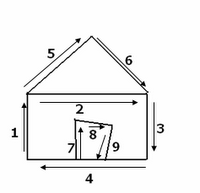 Laura and I came up with this one, although she probably deserves the most credit. Feel free to use it, but please don't redistribute anywhere else.