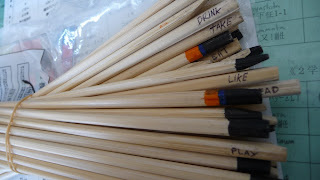 As a follow-up to the fantastic Typhoon Game which I published a little while ago, here's a very similar game which can be used when you feel typhooned out but still need a filler game.

I recommend you try the Typhoon, or at least read its description first to help you better understand this post.

It's basically the same game but with chopsticks instead of cards, snails instead of houses, and only one word per chopstick. Because there's only one word, students can be very creative, but you must also make sure you get the aim of the class clear at the start.

Again, it can last from 15-20 minutes up to the entire class. Here's how to make it:

Go to the 100yen shop (or any shop, really) and buy one of those bags of 25+ sets of disposable chopsticks. Separate all the individual sticks and write a verb on the flat end. I have two sets - one of all the first grade verbs, and one of all the second. I use these for revision at the start of second and third grades. However, a more organised person than me would have some mid-year verbs learned since the start of the year to throw in at a later date - mark the bottom of the stick or something to differentiate them.

In place of the typhoon cards I have what I call "black salt sticks". You could just as easily make them white and just call them salt. All they are is a chopstick coloured black at the end. These do the same job as the typhoon cards (kill all the team's snails). try to have about 1 salt stick to every 3 verb sticks.

I also have a couple of "magic salt attack sticks" in each set, which are coloured differently and wipe out the snails of another team (chosen by the team which draws it).

Separate the chopsticks between you and the Japanese teacher and hold them by the flat ends. One student from each of the groups comes and ask from "One chopstick please" and take it back to the group. They must make a sentence using that verb (tell them what grammar forms you want them to use) and come back to tell you it. Reward them with one, two or three dice depending on how much you like the sentence. The points on the dice equal points on the board. Nice points equals one snail, which is draw in nine steps like this:

Get the kids to draw these on the board as they aquire points. The winning team is the one with the most surviving snails at the end of the game.

If you try this game, or have any suggestions or comments please stick them in the comments box.