First, for you drive-on-the-right readers, let's have a quick review.
In America, cars drive on the right side of the road, like this: 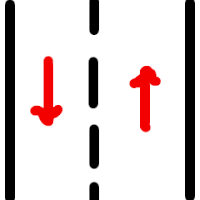 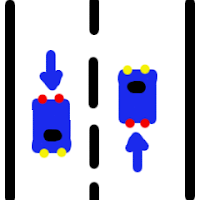 And in Japan (and the U.K. and select other countries around the world), traffic flows in the opposite direction, with cars on the left side of the road: 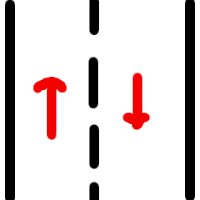 Pretty simple, right?
Well, here's the trick: In Japan, cars on the road are ideally supposed to look something like this: 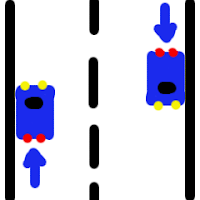 Yes, they're driving in the left lane. But notice where they're driving in that lane. In Japan, not only are you supposed to drive on the left, but unless you are planning to make a right hand turn within the next hundred meters, you're supposed to keep the car as far to the left side of the road as you safely can. This is what proctors are looking for in their driving tests, and this is why most people are confused why it takes them so many attempts to pass the test.

It takes some practice, especially if you're accustomed to compensating for space on the right side of the car instead of the left, like most American drivers are. And, this isn't behavior you learn naturally while driving in Japan, because a lot of Japanese people don't do this on real roads. But once you practice and get this point down, it becomes so much easier to pass the driving test, because the proctor isn't constantly ticking off points because you're not driving how Japanese people think you're supposed to drive!