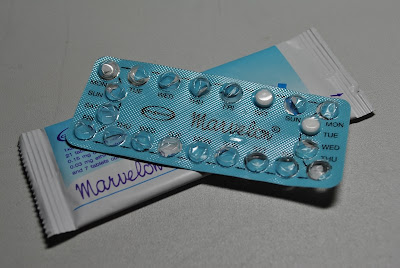 The leading choice for contraception in Japan is condoms, the second most popular (almost 20%) being pulling out, followed by the rythm method. The pill languishes in last place with an audience of just over 2% of the female population (vs. 18% in the US, 25% in the UK and 52% in Germany, for example).

Not surprisingly, this leads to a fairly large number of abortions. 28% of the 300,000 or so women who underwent abortions last year claimed not being married as the primary reason.

Reportedly a large number of Japanese women don't consider contraception to be their responsibility, and are put-off by the price and stories of horrible side-effects. In fact, when the pill was introduced a survey showed that 70% of women would never consider trying it.

However, it's strange that a country so lax with protecting themselves during sex isn't flooded with children. Japan's aging population is a constant worry, and no amount of sex-standing-up contraception seems to be helping. Although the number of abortions sounds high, it's still less than half of those of the US or UK.

It's also true that an increased use of the pill is usually coupled with an increase in life-threatening STDs like HIV.

Anyway, this is starting to get too complex for AccessJ! Here are the rules on contraception in Japan:

Any other methods or comments? Add them to the comments below.