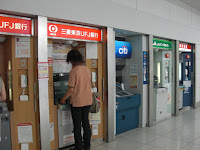 Take a deep breath... this is dry but useful information.

When making a bank transfer (振込, furikomi) in Japan, information regarding the transfer can only be sent using single-bit (half-width) katakana characters, Latin alphabet letters, numbers, or a small subset of punctuation. When you make a furikomi at a bank or ATM, the system will properly annotate information about the bank and branch you want to transfer to. However, properly entering the beneficiary's name is up to you.

(By the way, spaces are also valid in furikomi data. They count as one character.)

Usually, this is an obvious step: You enter in the name of the beneficiary exactly as he or she has directed you. The katakana used must match the katakana they used for the name on their account exactly, or the furikomi won't go through.
What you may not have known is that there are special abbreviation codes used to accommodate long company names so they fit inside the ATM/furikomi slip's character limit. (In my experience, the limit is often 15 characters.)
For example, if you were in charge of sending a furikomi out to the toy company Bandai, the formal name of the company, 株式会社バンダイ, wouldn't fit within a 15 character limit: ｶﾌﾞｼｷｶﾞｲｼｬﾊﾞﾝﾀﾞｲ
Sixteen characters. Damn. What to do?
The wrong way to handle this situation is to enter as much of the name as you can and truncate the end.
The right way to handle this situation is to use designated account abbreviation codes to eliminate common, long titles, such as 株式会社 (publicly traded stock company). A full list of such abbreviations is available here (Japanese).
In the case of our example, the correct abbreviation for 株式会社 is a simple ｶ. But, the next part of the process is also important. You need to use appropriate delineation to indicate how the abbreviation fits into the title. Because 株式会社 comes at the beginning of Bandai's formal company name, you'd start the name on the transfer out with a ｶ, follow it with an ending parenthesis, then add the rest of the company name, like so: ｶ)ﾊﾞﾝﾀﾞｲ
Similarly, if the 株式会社 bit came at the end of the company name, like in music company Yamaha's name, ヤマハ株式会社, you'd use a beginning parenthesis and a ｶ at the end of the name: ﾔﾏﾊ(ｶ
But, what if the 株式会社 bit comes somewhere in the middle of the name you need to send to? Maybe, in a much more likely example, you're not sending to the company's name as a whole but to a specific department: The account name you're sending to is the general affairs department at Yamaha, ヤマハ株式会社総務部. The answer is fortunately unsurprising: You get to put a parenthesis on each end of the ｶ, to end up with a fantastic ﾔﾏﾊ(ｶ)ｿｳﾑﾌﾞ
OK, so what about when you've used all the reasonable abbreviations for your name, and you still end up with something too long, like this (fictional) general affairs department name at Takeda Pharmaceuticals: 武田薬品工業株式会社総務部. Even after abbreviation, it's still a whopping twenty-two characters: ﾀｹﾀﾞﾔｸﾋﾝｺｳｷﾞｮｳ(ｶ)ｿｳﾑﾌﾞ
In this situation, truncation is the rule of thumb. The bank will match up as much of the beneficiary name you could enter to the actual name on the account and make a decision about whether the transfer is legitimate. If that answer still leaves you feeling queasy, there's a simple but time-consuming way to double check yourself: ATMs at some banks will display the account holder name on their confirmation screens when you try to initiate a furikomi. The account holder name is displayed in single-byte katakana, up to a certain number of characters, just like you'd need to write it in to make a successful transfer. Simply go to such an ATM, start making a cash transfer (where you put money into the ATM to send rather than sending from your bank account), and fill out the beneficiary details up to the confirmation screen. Once you've seen how the name should be written, take a memo, and hit "Cancel" on the ATM so your experimental transfer doesn't actually go through.