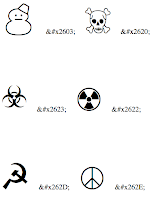 Last week we showed you a bunch of words you can type and turn into cute symbols using the default Japanese IME dictionaries. Although a lot of symbols are programmed in to Windows and other operating systems' IMEs by default, there are still thousands upon thousands more symbols waiting to be used in the Unicode character set.

Today we'll take a look at how you can browse through all the available symbols.


The usual way to access all symbols in a font is the character map (also called the character palette) for your operating system. In Japanese, it's called the 文字コード表.
The character map in Windows can be accessed from the Start menu. It's under "Accessories" then "System Tools."
You can also get to it quickly by pushing the Windows Key + R, then typing charmap into the box that appears. 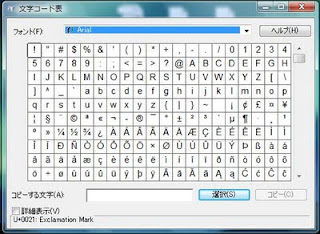 Once the character map appears, select the font you use, then scroll to find the symbol you want to use. By pushing the "select" (選択) button then the "copy" (コピー) buttons in the bottom-right, you can copy any symbol to your clipboard and use the paste command to insert it anywhere else.
This method is more cumbersome than the default dictionary definitions we talked about last time, of course, but it allows access to every available symbol in a given font (including, coincidentally, every kanji).
The character palette in Mac, by the way, is apparently activated with command + option + T.


IME Symbol Catalog
As comprehensive as the character map, but slightly more organized, is the catalog of symbols contained within Windows' Japanese IME. To access this catalog, start typing something in Japanese, then without hitting enter, push the F5 key. The symbol catalog will pop-up and you can browse through the various categories of symbols and kanji conversions. The icons discussed above can generally be found under the folder called "その他の記号." 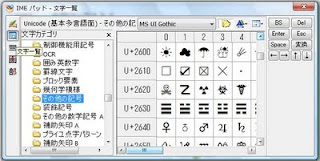 The same catalog can also be accessed from the IME toolbar, usually displayed at the bottom-right of the desktop on Japanese-enabled machines. With a text-input field selected, click on the icon that looks like a paint bucket to open up the IME Pad. The symbol catalog is the second icon on the left-hand side of the pad.

The drawback of these methods is the amount of effort required each time you want to find and insert a symbol. If there are certain symbols you want to be able to insert quickly at any time, but they aren't defined in the default IME dictionaries, you can use your IME's User Dictionary! A User Dictionary is used to register names, words, and symbols that you use often when typing Japanese but which aren't contained in a default conversion dictionary. We'll discuss editing the User Dictionary in a future post!