WS: Mine and His (First grade JHS)

Those of you teaching the JHS New Crown textbook at the moment will be on or approaching using personal pronouns and possessives (I, my, me, you, your, you, he, his, him, she, her, her).

My lovely girlfriend has again made a great lesson plan. On Friday I had a fantastic lesson with my students on this, so I thought I'd share the activity that we did together. 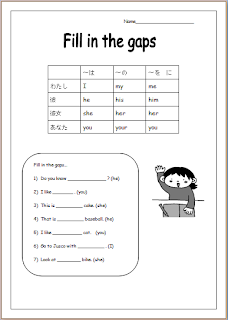 The lesson had three parts and took 35-40 minutes.
The first was a worksheet. Click here to view in Google Documents but bear in mind that the Google previews are invariably awful, but if you download it and open in word the formatting should be fine.
I introduced the sheet as the activity before "The Game", and had them individually work on the sentences after I had explained the concept with several examples on the board.
If it isn't clear enough, the idea is to change the personal pronoun in parentheses into the correct form to make a good sentence.
When they'd finished I got them to volunteer to read out the answers one by one.
The next part was the classic game of Karuta. If you don't know the game, it is a fun and easy way of using ten minutes in class that can be played with any set of vocab cards. This time I played it with nine groups of three or four students (push the desks together). Each group had a set of the 12 words on the sheet (I wrote them out on bits of card, but here is a sheet for printing and cutting) which they spread out across the desks. I shouted out the words one at a time ("you" and "her" were double bonuses) and they had to grab the right card as quickly as possible. Spread the words out to build tension.
At the end of that I got the students with the most cards in each group to stand up and have a janken battle. The winner was Class Champion (!!!!!!!!!!!!).
The third part also used the karuta cards, so don't collect them in just yet, and don't break up the groups. During the karuta game I had the Japanese teacher write up 10 sentences on the board, just like on the sheet (with the key word missing). I had made cards (big enough for all the class to see) of "you", "I", "he" and "she". I shuffled the cards before presenting the class one at random for each sentence. When I held up the card they had to find the corresponding form in their karuta cards and bring it to me as fast as possible. For example, for the sentence "I like _____ bike." I held up "He". They had to find the "his" card and bring it to me asap.
The kids went crazy at this point and almost trampled me to death. It was hard, but I picked the first five students with the correct answer and gave them numbers from one to five. Then they went to the Japanese teacher at the blackboard who had a list of the nine groups. They told her their number and she awarded them 5 points for number 1, 4 for number 2 etc.
Beware: I got punched in the balls three times during this activity! Also note that you should move around the class for each word so that no group has an advantage.
At the end of that, add up the scores and give the winning team a big round of applause.