Being an ALT #5: Getting Drunk on Duty (The Enkai) 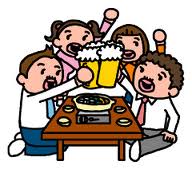 All the drunken work party antics you've seen in Japanese TV shows and movies are true. The enkai in Japan is a sacred event where work colleagues get completely hammered as a semi-compulsory part of the job.

On special days, like big sports-events or opening/closing-ceremonies at school, you'll be invited to join the majority of your co-workers for an enormous meal and massive piss-up. Also, when a colleague gets married, or occasionally when they have a child, win the lottery, etc., be prepared to give your liver a bashing.

It won't be cheap, but if you treat it right it will be the gift that keeps on giving. It can also be a quite surreal experience.

First, beware the price. At my school, we have enkais at the start and close of each term, on sports-day, on faculty sports-day, and on PTA day. Then there are other exclusive enkais, like Maths department enkais or second grade teacher enkais, which are sprinkled randomly throughout the year. The average cost of each of those is 5,000 to 6,000 yen. Smaller-scale ones might cost a bit less, and PTA enkais can be catered affairs on school grounds, bringing the cost down to around 2,000 yen.

The enkai itself includes lots of rambling speeches, each teacher trying to outshine the last with golf-clap-caliber humor. One speech, usually given by the vice principal (教頭先生) will kick off the party, and once people are drunk enough, a proper speech session for everyone will begin. Different people talk depending on the event, like retiring or transferring teachers at the end of the year and new teachers at the beginning of the year. Or, for example, school festival enkais incorporate as special guests the old teachers who transfered away last year. These speeches can go on for bloody ages. At the start of this school year, my school had 9 or 10 new teachers and the speeches in total went on for more than an hour. It wasn't too bad, because more food kept coming to the table during this time, but it was a bit awkward when the new and very drunk office boy could barely stay standing through his 10+ minute introduction (which he had decided to do standing on his chair).

The food will vary from workplace to workplace. At my school, organisers like to put things together the old-fashioned way, meaning a traditional Japanese, sit-on-the-floor banquet. These entail about six small dishes of various Japanesey things, like raw mushrooms in cold water, leaf tempura, koi sashimi, eighty-four types of tofu, and sixty-eight views of Mt. Fuji. Some of it is delicious, some edible, and some a gift for the guy next to you. 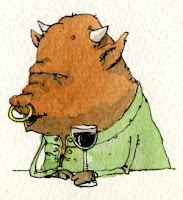 The drink is an unending stream of happiness, poured not by yourself, but by the person sitting next to you, or by the person crawling around the table with a bottle in hand pouring beer shots while bowing profusely. Beer is usually the only option (unless the high-roller principal has called for a bottle of the establishment's finest sake), and said beer is usually a lower-end brand name like the bowel-loosening Asahi Super-Dry or Kirin's best-effort rival brew. If a sake bottle shows up, Mr. Principal is probably going to call you over, being the token foreigner, and you'll end up drinking it even after promising yourself you wouldn't this time. Of course, getting wasted isn't obligatory. You can be an いい子 and drink oolong tea instead. This is where the tradition of filling other people's glass gets a bit silly: Having your beer topped up by excited co-workers is great, but being forced to glug down 2 litres of oolong tea an hour for three hours waterlogs anyone's stomach.


The aftermath of the enkai is you stumbling out of the building after mumbling your way through the school song (or company dance or whatever convey's your workplace's spirit) and the big banzai, only to discover it's still light outside and children are playing in the park. 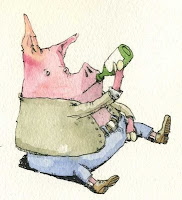 And then... beware of the afterparty. This is where things and people can get messy. Usually teachers will divide into grade-groups and go to different izakayas around town where they will somehow find space for more food and a lot more alcohol. Treat these invitations with caution. After the afterparty, most of your male coworkers will go find a flowerbed to sleep in (the female coworkers will either be remarkably sober or have been asleep at the table for hours). You will go home to your totally sober girlfriend feeling like you've been hit by a train, but trying to retain your swauve debonaire persona.


And the worst part is that all more often than not happens on a weekday!


But anyway, it's all in good fun, and not going to an enkai you've been invited to is a faux pas. Miss a few, and feel the camaraderie you used to feel at work slip through your fingers. 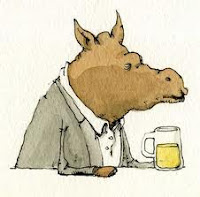 For me, the most bizarre thing about school enkais is that I suddenly find myself sitting among dozens of new alcoholic friends who develop a passable ability to speak English. They'll talk happily all night about being my younger- or older-brother (whichever is least appropriate), how tall I am, and how massive my penis must be. Then after the party's over they'll never speak to me again until the next enkai. Are they ashamed? Can they not remember our solemn friendship pact unless they get drunk again? The whole thing is a mystery.

Any reader-stories in the comments please.