Being an ALT #14: Brushing Your Teeth At School 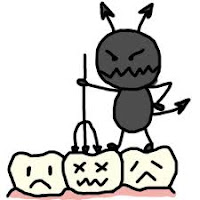 Japanese people are in the tradition of brushing their teeth directly after meals (or at least lunch). This will happen in the workplace, too. After lunch at school, literally everyone will be at a sink brushing away; which is why they have so many long stainless steel sink areas.

Some Westerners, not being in the habit of doing this, have received less-than-polite comments from co-workers.

BUT, there is a general consensus amongst Western dentists that this practice is bad for the enamel of your teeth. Read on before making your own mind up.
A brief search on Google will provide a seemingly endless list of sites advising against brushing right after meals. It seems that the process of chewing and swallowing foods, especially those with high acidity, naturally weakens the enamel layer of your teeth. Brushing during this weakened phase will gradually remove that enamel.

Dentists seem to say that after an hour, enamel will have re-hardened to a stage at which it is safe to brush.

One thing I wasn't aware of before my "brief search on Google" was that in addition to this danger, brushing your teeth more than twice a day is at best unnecessary, at worst harmful to your teeth and gums. Prolonged exposure to brushing will, again, wear away the enamel.

According to the link above, you should limit your brushing to two times a day, for around two minutes a time. You should also (though how you are going to calculate this without a ridiculous toothbrush is beyond me) apply a pressure of 150grams (confusingly referred to as the same as "holding an orange").

However, all of Japan seems to follow this practice. Who is to say they are wrong to do so? Many people who have worked with Japanese children will complain about the really horrible state of their (the children's) teeth, but how many of those have worked with children elsewhere and can compare the two?

One more thing which foreigners in Japan seem intent to mention is the lack of fluoride in Japanese toothpaste. Dentists generally recommend a fluoride-containing paste. However, the two stock responses to this are:

In any case, my philosophy here is if it ain't broke, don't fix it. I've never had a cavity brushing the "English way", and will happily continue doing so.

Email ThisBlogThis!Share to TwitterShare to FacebookShare to Pinterest
Labels: Being an ALT