WS: Eigo Noto 2: When is your birthday 2 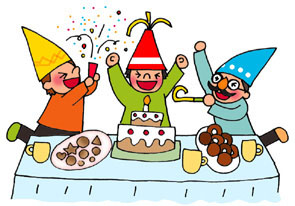 This lesson carries on from my previous post last week. This lesson reviews the months of the year and introduces the question "When is your birthday".

In the next lesson we will look more at answering using "It is in November" and "it is December 4th".

Greeting - Hello, How are you, What month is it?

Chant - Same as last week using the Eigo Noto CD. The students should remember it, and be able to chant along after a few tries.

Ladder game - This is one of my favorite games, and one I actually used to play when I was a child! I have adapted it to use in my elementary classrooms and now frequently get asked to play it! However, it is a little difficult to explain...

1. Split the class into two teams.

2. Within each team put the students into pairs. (They MUST have a pair, use the teacher if numbers don't work out, failing that I have used a broom as a student in the past...).

3. I set up one team first, manhandling the children, and then get the other team to copy them.
The first pair should sit, with their feet touching each other, legs out straight.
The next pair should sit beside them in the same position. See fig.1

So pair 1 would run up the ladder and around, and sit down at the front again. The final pair would run around, all the way up and then sit down.

The team with the first pair sitting down, gets one point.

Get it? Its a little complicated, but I feel it is well worth playing! My students have a lot of fun with it!

N.B Hands should be kept on laps, not behind as shown in the diagrams. Otherwise fingers can get stamped on.

Also check the room before playing for sharp edges, I once played this and students started slamming into a wall at one end of the room to slow themselves down, it was fine until one student found the nail which was sticking out of the wall and stabbed himself in the hand (he still won that round).

Also you may want to take shoes off, but I find slippery socks are more dangerous than squashed fingers!

When is your birthday? - after such an active game some quite time is required!

Finish - Hi-fives, and requests to play the ladder game the next week...